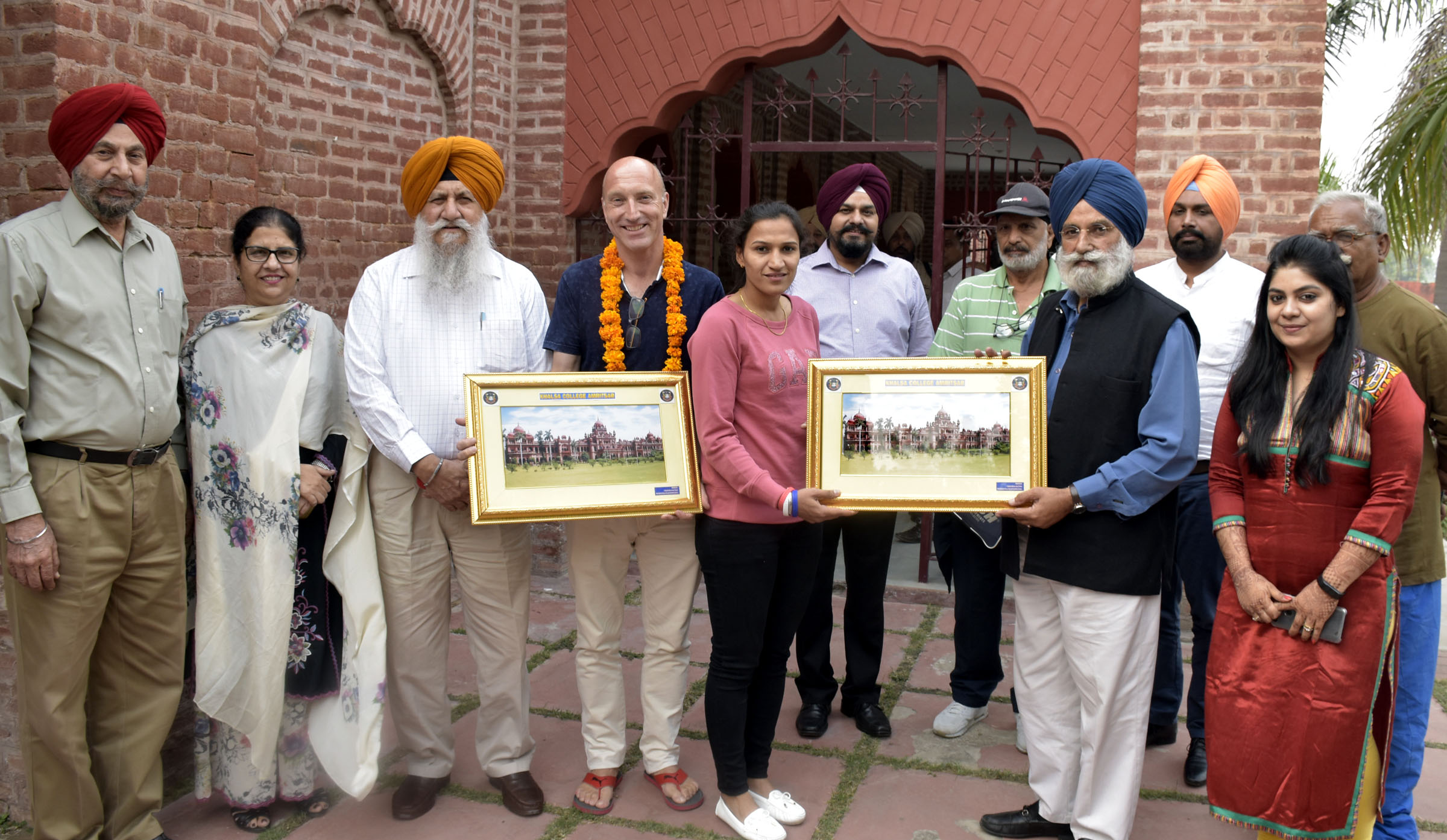 Welcomed by Chhina, Dr.Walia, feel the talents lies in Rural India
Indian Women Hockey team Coach Eric Wolink and National Girls Hockey Captain Rani Rampal today visited Khalsa Girls Hockey Academy here and batted for finding talent in rural India. They said more potential lies in the villages across the country but we need to tap probable by holding the camps and training to revive the game of hockey.   Eric who joined as coach of the national team one and half year back said Indian hockey has bright future as he advocated talent search, strengthening of infrastructure and sports management. Both were accorded a grand welcome at the Academy by Khalsa College Governing Council (KCGC) honorary secretary Rajinder Mohan Singh Chhina, Vice Chancellor Dr.GS Walia and sports director Dr.Kanwaljit Singh.
Eric congratulated the Academy which has recently been accredited by the Government of India as a National Academy under the `Khelo India’ Talent Development Programme and said that the main purpose of his visit was to interact with the talented players of this Academy, inspire and motivate them to achieve higher goals in life. During his interaction with the budding athletes he stressed on mental strength, self confidence, physical stamina and self belief as the key to achieve their Asian/Olympics  dreams.
Earlier Chhina emphasized on the dire need to upgrade and maintain sports facilities at the grassroots and maintain the sports infrastructure. He said they feel proud over the visit of the top Hockey stars at the academy and Eric who basically is from Netherlands have himself been a top hockey player in the Europe.   Rani Rampal who had recently visited the Academy and came second time today appreciated the efforts being put in by coaches and players and earning recent accolades including prestigious Nehru Cup and Youth Olympics.
VC Dr. GS Walia thanked Eric and Rani for visiting the Academy, enriching the players and boosting the morale of all the girls from humble background to do well. He went on to thank the KCGC management for providing every kind of opportunity to the students of institutions running under the Council, establishing the Hockey Academy and providing the girl players free education and consistent training under the best coaches of the country to horne their skills to perfection.
Dronacharya Awardee coach Baldev Singh the chief coach expressed their happiness and pride on seeing the Coach of Indian National Hockey team visit the Academy along with their student who is bringing laurels for the Nation.